An exhibition of artists inspired by Nature

curated by James Putnam and produced by Alteria Art

Since the beginning of human history in every culture, nature has played a vital role in creative expression. This is seen in the earliest known cave paintings of animals that are at least 35,000 years old.

This exhibition aims to examine the way contemporary artists have been inspired not only by nature but also its processes  - evolution, birth, growth, ageing, decay, change. With acute observations of the fascinating rhythms of the land, sea and the sky, their practice is more about the substance than the subject of the work.

Taking inspiration from nature’s inherent forces, their individual approaches can result in works that are site-specific, monumental or ephemeral. Nature is constantly in a state of change and the artists’ awareness and sensitivity to this change is crucial to the creation of their work that can be representational, conceptual, abstract, and sometimes otherworldly.

Although nature was venerated through art in the ancient world, it featured less in Western art history until the last four hundred years. The tradition of landscape painting developed where artists captured its beauty by depicting plants, trees, mountains, valleys, forests, rivers and seascapes.

From the mid-19th century, many artists favoured direct observation of landscapes outdoors in natural light, referred to as plein air painting. Claude Monet (1840-1926) captured natural beauty in an unprecedented way and his paintings of water lilies were radical and highly innovative for their time. Many contemporary artists inspired by nature now use photography as their primary medium. Ansel Adams (1902-’84) was a major pioneer in using photography to record the natural environment typified by his images of Yosemite National Park. As an ardent conservationist he was committed to preserving the landscapes he photographed.

In the 1960s and 1970s, Land art was part of the wider conceptual art movement exemplified by the site-specific work of Robert Smithson (1938-1973), His monumental intervention with nature, Spiral Jetty at the Great Salt Lake near Utah, was created entirely out of mud, salt, rocks, earth, and water. Smithson, who was interested in the interaction between humans, nature, and time, maintained Spiral Jetty is meant to reflect on and mimic the unpredictability of the earth and the creative and destructive power of the elements.

Richard Long is the best-known British land artist who makes monumental sculptural installations of stones and also paints using handprints of mud in circular configurations. But his art is most characterised by walking in landscapes, sometimes in remote parts of the world for many days. He documents his walks through photography, maps and texts and his work is about the visibility of his actions rather than the representation of a particular landscape.

Similarly rather than making images of nature, Andy Goldsworthy could be said to collaborate with nature using its materials such as snow, ice, leaves, bark, clay, stones, feathers, petals, twigs and water. His intention is not to impose his art on nature, but to work with it instinctively, while patiently learning and understanding its materials. The scale, shape, orientation and longevity of each Goldsworthy work depend entirely on various factors like the local terrain, weather conditions and available time to create the work. He records the frequently ephemeral works in photographs and video before or as they disappear. In Rain shadow. Cuenca, Spain 6 October 2014, the imprint of Goldsworthy’s body is a symbolic merging of the artist with the natural landscape or his connectedness with the great flux of the universe.

Movement, change, light, growth and decay are fundamental to nature, the energies that artists strive to capture in their work. Nature’s main motifs - trees, rivers, stones and leaves suggest growth, fluidity, permanence and ephemerality and therefore allude to time. Growing up on a small farm, Alastair Mackie gained an intimate sensibility to the lifecycle of birth, death and regeneration, and the delicate tension that exists between nature’s duality of creative and destructive forces. Using many diverse organic materials such as mice skulls, wasp nests, owl pellets and cuttlefish bones, he creates meticulously constructed and labour-intensive works where process is as significant as the finished work.

Using and refining techniques of cameraless photography Susan Derges has continued to make works by exposing images directly onto photographic paper. She often does this at night in the open air as if using the natural world as her darkroom. Sometimes she submerges large sheets of photographic paper in rivers and uses the moon and flashlight to create the exposure. Her photographs are an ongoing enquiry into the separation and connectedness with the natural world and the relationship of the self with the observed. These images seem to suggest alchemical layers of meaning, testing the inter-relation between the elements of fire, water, earth and air. She captures the hidden patterns in flowing rivers, the energy of waterfalls and breaking waves and the states of water from ice to cloud, from the solid to the intangible. Some of her works have an uncanny metaphysical quality as if alluding to shamanism or animism, perhaps suggesting that nature could possess an otherworldly spiritual essence or force.

Many of the participating artists’ works are guided by a great respect for nature’s basic shapes and structures. The sculpture and works on paper of Peter Randall-Page have always been informed and inspired by his study of organic forms. He believes they offer a unique insight into the underlying principles determining growth and the forms it produces, relating to the dynamic tension between order and randomness. Mathematics are at work in nature and the so called Fibonacci numbers, otherwise known as the ‘Golden Section’,are an aesthetic pattern that natural objects seem to follow. As Randall-page puts it: “Geometry is the theme on which nature plays her infinite variations, fundamental mathematical principles become a kind of pattern book from which nature constructs the most complex and sophisticated structures.”

Dramatic cloud formations have traditionally inspired artists for their evocative and meditative qualities as illustrated in the sketchbooks of Leonardo da Vinci and J.M.W. Turner. This fascination is shared by Mat Chivers who has studied cloud formations in great detail, making drawings from direct observation and from photos he has taken from airplane windows. Yet he is more attracted to their inherent ambiguity and metaphorical aspects than their emotive or romantic quality. He combines traditional sculpting techniques such as direct carving in stone, with new technologies such as rapid-prototyping which enables him to cast undulating forms in less conventional mediums like opalescent glass.

An awareness of nature’s increasing fragility is central to Lucy & Jorge Orta’s practice, which is concerned with urgent issues of ecological and social sustainability. Their work Perpetual Amazonia; Tree of Life, 2013, focuses on the largest remaining rainforest that helps to stabilise Earth's climate but is threatened with deforestation. The work is part of Lucy + Jorge Orta’s ongoing project following their 2009 expedition to the Peruvian Amazon where they photographed hundreds of rainforest plants. These were subsequently transformed into works in various different media. Each is accompanied by a certificate of ‘moral ownership’ assigned to a precise hectare of land in the Amazon. Tree of Life comprises a bronze olive branch surmounted by giant hand blown Murano glass flowers that symbolise the fragile balance of our eco-system. Appropriately the Amazon is also where the world's largest flower can be found.

Yuken Teruya’s work traces the link between ecology and consumer culture using diverse materials such as newspapers, toilet paper rolls, shopping bags and butterfly chrysalises. He juxtaposes meticulously cutout silhouettes of trees with the logos of consumer products that comment on the relentless sacrifice of trees for the demands of commercial packaging. Another participating artist who uses unlikely materials to represent natural objects is Douglas White. His Black Palm Maquette, 2016, is made from fragments of blown-out tyres and is a scaled-down version of a monumental life size version. During a residency in Belize, Central America, the charred remains of palms by the roadside fascinated him since the trees are burnt when they become diseased. He began collecting discarded tyre fragments that also littered the country's roadsides and constructed his first ‘Black Palm’ sculpture, which he installed among the natural palms in the Belizean jungle.

Art inspired by nature hopefully helps to convey a new respect for it, reinforcing the growth of a sense of public and individual responsibility for conservation of the environment. Many artists are interested in the congruency of human beings and nature and it is perhaps significant that tree roots, branches and river networks closely resemble the configuration of our human arteries and lung passages. We are inseparable from nature, it is all around us and sustains our life force, the air we breathe and the food we eat.  We might ask ourselves are we inside or outside of nature, part of it or separate? Although we may appear to be growing ever distant from it, we still instinctively retain a penchant for its forms and materials that seem destined to co-exist with humanity. Despite mankind’s ongoing advances in technology we can still marvel at the beauty and force of nature and its inherent creativeness. 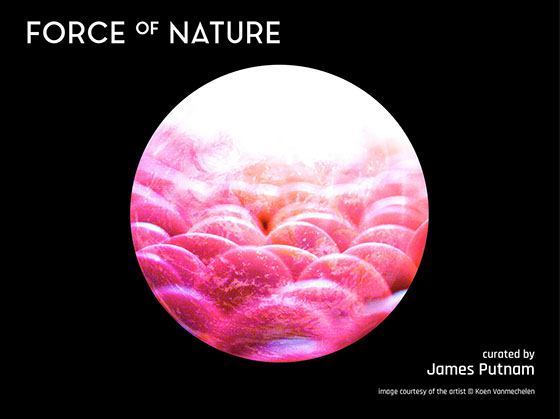