THE HOUSE OF ST BARNABAS, LONDON

‘Short of Aphrodite, there is nothing lovelier on this planet than a flower, nor more essential than a plant…Without green plants we would neither breathe nor eat. On the under-surface of every leaf a million movable lips are engaged in devouring carbon dioxide and expelling oxygen.’

Imagining the Amazon is a series of new paintings and monotypes by Tamsin Relly, in the Garden Room at The Collective, The House of St Barnabas, London.

The exhibition explores the relationships between wild and cultivated jungle environments; and the preservation of these ecosystems through conservation, remote constructed greenhouses and our imaginations.

While celebrating the wonder and bio-diversity of life in the world’s rainforests, Relly’s work considers the fragility and decline of these habitats through deforestation and climate change.

Set against the backdrop of the rainforest-inspired wallpaper in the Garden Room, the installation reflects on how notions of exotic environments are woven into the everyday through art, design and popular culture. ‘I’ve always taken comfort in the idea of wilderness, but as more of our natural spaces are cultivated, developed or polluted, perhaps any truly untouched nature is at risk of living only in our imaginations.’

Relly has drawn from both found media imagery and first-hand observations in locations such as The Eden Project in Cornwell, Milkwood forests in South Africa, the fabricated oasis of Las Vegas and displaced wildlife in zoos. She works with the fluid and unpredictable qualities of her materials and processes to present impressions of natural and urban environments in states of uncertainty or impermanence.

Tamsin Relly is a London based visual artist who works across a range of media including painting, printmaking

and photography. South Africa born, she moved to London in 2009 and received her Masters in Fine Art at City & Guilds of London Art School in 2011. Relly’s work has been exhibited and collected widely in the United Kingdom and internationally. She had a solo exhibition, Jungle Snow, at The Place Downstairs in London (2014). Her work has been included in group shows at The Royal Academy of Arts, Ronchini and T J Boulting in London; SMITH, Cape Town and Galerie Rue Visconti, Paris. Artist residencies include Arteles, Finland (2016), RE·THINK: Environment, National MaritimeMuseum, London (2015), Pocantico, Rockefeller Brother Fund, New York (2015), and The Arctic Circle, Svalbard (2014). Relly was recently shortlisted for the Denton’s Art Prize in London. 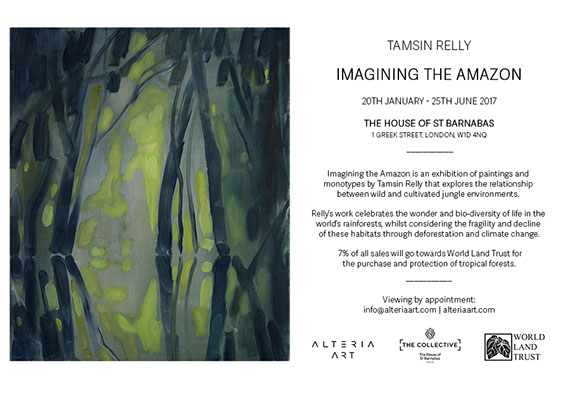