An etching project with artworks by:

With special thanks to The Gaia Art Foundation for their kind support.

The Modern Penelope Collective: A series of new etchings and other works, follows on from the successful The House of Penelope exhibition at Gallery 46, Whitechapel in January 2017.

Since Summer 2015, ideas, practices, contacts, support, techniques and encouragement have been shared between The Modern Penelope Collective, a group of curators and artists based mainly in London, with a discourse on the myth of Penelope running through as a recurrent theme. Alteria Art has offered each featured artist time in Arcane Print Studios to create this new series of etchings, a continuation of the Collective’s shared vision.

Penelope is a mythological character from the Odyssey who has been an inspiration throughout time, known for her faithfulness and patience. Her story embodies concepts of waiting, longing and mourning, but the strongest element is her willpower which enabled her to resist against authority and protocol and allowed her independence through her intellect and her work.

Penelope’s husband is lost to her for 20 years, it is unknown whether he is alive or dead whilst he travels the world facing hardships and adversities, trying desperately to make his way home again after the Trojan war. She is under pressure to marry one of her many suitors and she makes the promise to do so the day she finishes sewing her father-in-law’s shroud. She refuses to be a spectator to her own destiny and through her guile and ability, she chooses to stand against this condition. In a very subtle manner, she spends her nights undoing what she has been weaving throughout the day. Penelope has wit and refuses to be defeated.

The Gaia Art Foundation is an independent non-profit organisation dedicated to supporting diverse cultural initiatives and building a global platform to encourage multicultural dialogue through visionary artistic practices, partnerships, independent projects and production support. The Foundation's principal aim is to take on the challenge of contemporary cultural discourse and contribute to the development of new ideas and ventures - ultimately becoming a cornerstone for growth, education and innovation.

Since its initiation, Gaia Art Foundation has been involved in public art, publishing, as well as curatorial projects in London and abroad.

Check our Editions page for more details about the works. 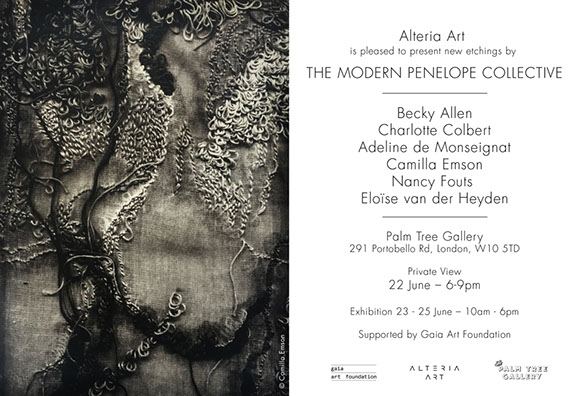